Sia Amma is a comedian and has been featured on KQED two times and has been quoted in Comedy Clubs around the Bay Area more times than any other comedian. She is smart, funny and Africa’s most outrageous and inspiring sex educator.

She has given presentations combining humor and celebration that are refreshing, honest, and sexuality informative, and have drawn great reviews at major colleges, universities, and other locations around the county. Sia Amma’s newest coming of age presentation for mothers and daughters is called “What Mama Said About Down There.”  She has done more than 30 guest appearances on numerous national radio shows including KPFA, three times and as seen on channel 2 evening news!!! Has performed “Salute To The Vulva” on 10 different college campuses and honored by the Board of Supervisor Ross Mirkarimi of districts 5 for her work.

Growing up in a small town between the boundaries of Liberia, Sierra Leone, and Guinea, Sia Amma offers a fresh and unique presentation of her work as an African immigrant in the United States and as an activist on behalf of her community of origin. While integrating a western perspective, Amma is one of the first innovators to utilize the mediums of performance and comedy to specifically address the brutal methods and public publicizes impacting women and girls. Through the medium of performance, she presents challenging issues with a comedic overtone.

Salute To The Vulva

“Salute To The Vulva” is a six-woman show that has won over Bay Area audiences since its inception several years ago—it’s been hailed for its honesty, sense of humor and, most importantly, the way it boldly tackles all sides of the female fold, as it were. —Greg Archer “Amma extends her loving philosophies to all.” —SF Bay Times 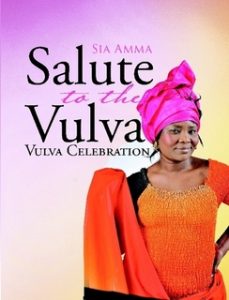 “The largely misguided tales mothers share with daughters." —SF Weekly "Don’t miss this groundbreaking play that is humorous and poignant for mothers and daughters." —Susan Martin “Armed with insight, biting wit and gentle humor, the play features a lively multicultural female cast and a “True Confessions” presentation format that takes a page from beauty parlor fodder of the 50s. As the play unfolds, Amma takes fifties-style sexual repression out for a spin and hangs it up to dry.” —Ave Montague 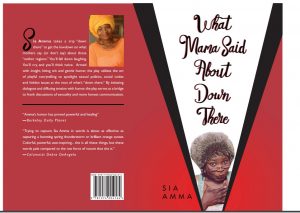 Sia Amma is out of Africa. She grew up in a small town between the boundaries of Liberia, Sierra Leone and Guinea in West Africa. She remembers walking through town as a child, seeing family members, beautiful buildings and children laughing in the streets. In the market, Mandinka women sold ceremonial white cloth. Twenty years later, when she returned following the civil war, that was all gone. The entire town had vanished. Amma is a stand-up comedian, dancer and actress who is best known for making fun of African and American cultures, relationships, life experiences, sexuality and, of course, herself. 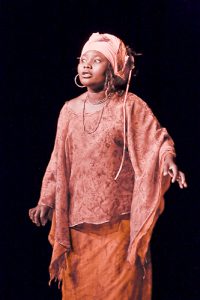 Hilariously entertaining; Super Food: The Musical is a bit of dancing, with lots of audience participation. You will see all kinds of extraordinary things such as apple, fish and carrot but you can't eat any at the show until you get home. One thing is for sure- the show provides an honest, charming chance to sing along. Sia Amma is out of Africa. She is a stand-up comedian, writer, dancer, and actress who is best known for making fun of African and American cultures, relationships, life experiences, sexuality and, of course, herself. Her presentations combine humor and celebration that are refreshing, honest, and very informative about the issue of female circumcision. Her newest presentation, Super Food: The Musical is inspired by growing up on the farm and healthy eating. The musical was first performed in schools and theatres in San Francisco and Santa Cruz. 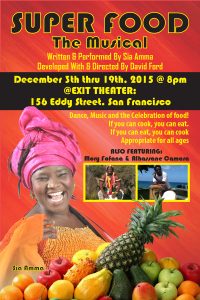 In Search Of My Clitoris

Sia Amma in her playful and wise One-Woman Comedy Show By 1998, she started touring the country with her One-Woman Show called “In Search of My Clitoris” inspiring others to talk about female genital mutilation and examine their sexual attitudes towards women’s sexuality.